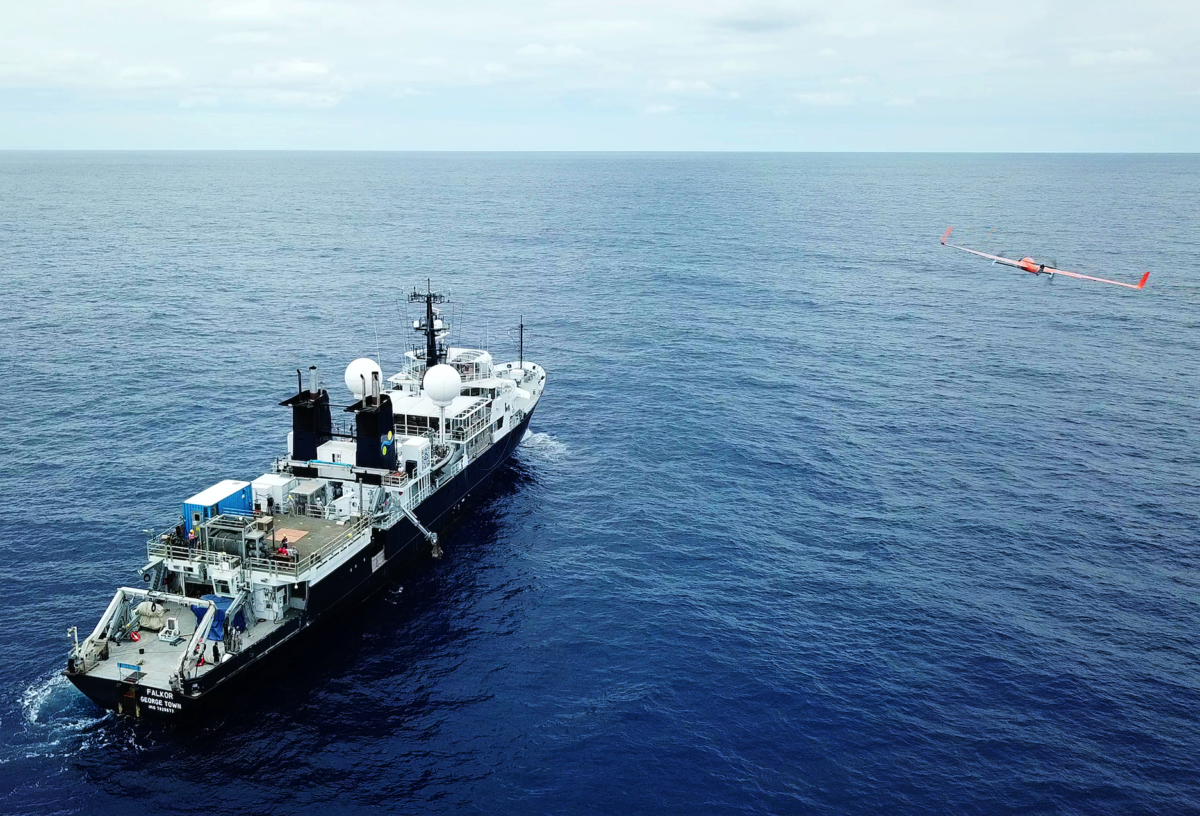 Our lives depend on the oceans in ways most of us don’t even realize. That’s why the work of Schmidt Ocean Institute aboard the R/V Falkor is so vital to understanding what’s happening beneath the waves.

SOI’s R/V Falkor serves as an oceanographic research platform for scientists from around the globe. The vessel is a marvel of technology, with innovative shipboard embedded scientific instruments and systems, enhanced communication via telepresence and satellite data streaming, and shipboard high-performance computing for at-sea modeling and data analysis.

Earlier this summer, the Falkor was home to an international team of distinguished researchers and engineers on the Exploring Fronts with Multiple Robotics expedition — including FlightWave Aerospace Inc. Co-founder and CTO Trent Lukaczyk, Ph.D. During this three-week voyage to the North Pacific Subtropical Front, 1,000 miles west of California, the team worked together to unravel and understand the ecological mysteries of this dynamic front.

The voyage was a valuable opportunity for engineers and researchers to experiment with the simultaneous management of multiple autonomous vehicles. The team spent days deploying a flotilla of robotic underwater vehicles (AUVs), autonomous surface vessels (ASVs), and unmanned aerial vehicles (UAVs) equipped with a variety of different instruments. Under and over the sea they collected data and tested their equipment against the elements. While the crafts gathered valuable data, a cloud communication software called Ripples tracked their locations and archived the data in real time.

Complementing the equipment in the water, an airborne UAV, the FlightWave Edge, showed the researchers that multiple devices could send back data giving a much more complete picture of what was happening from above and below sea. This information is vital when studying ocean fronts and the tiny creatures that make their homes there.

Researchers used the Edge to try out three types of sensors: a thermal camera to measure sea surface temperature, a multispectral payload to detect plankton, and a sensor made by NASA that measures a gas called DMS emitted by plankton. The team even used an digital 3D printer during the voyage to design and build two additional nose cones for the Edge, allowing additional missions to take flight.

“Their marine technicians were awesome, super supportive,” Lukaczyk said. “Networking into a system of autonomous assets via the R/V Falkor’s network and supercomputer put this demo on a whole new level. The data we were collecting was fundamental to the operation of that part of the ecosystem.”

SOI’s ongoing work is revealing new knowledge about the ocean that will help humankind understand and better appreciate and care for Earth’s life-support system. Since this Sunday, July 15th is Social Media Giving Day, it’s a perfect opportunity to support SOI’s efforts by liking their pages and following their expeditions on social media: @SchmidtOcean. You can also engage with them through one of their many education opportunities. Learn more about SOI at https://schmidtocean.org.