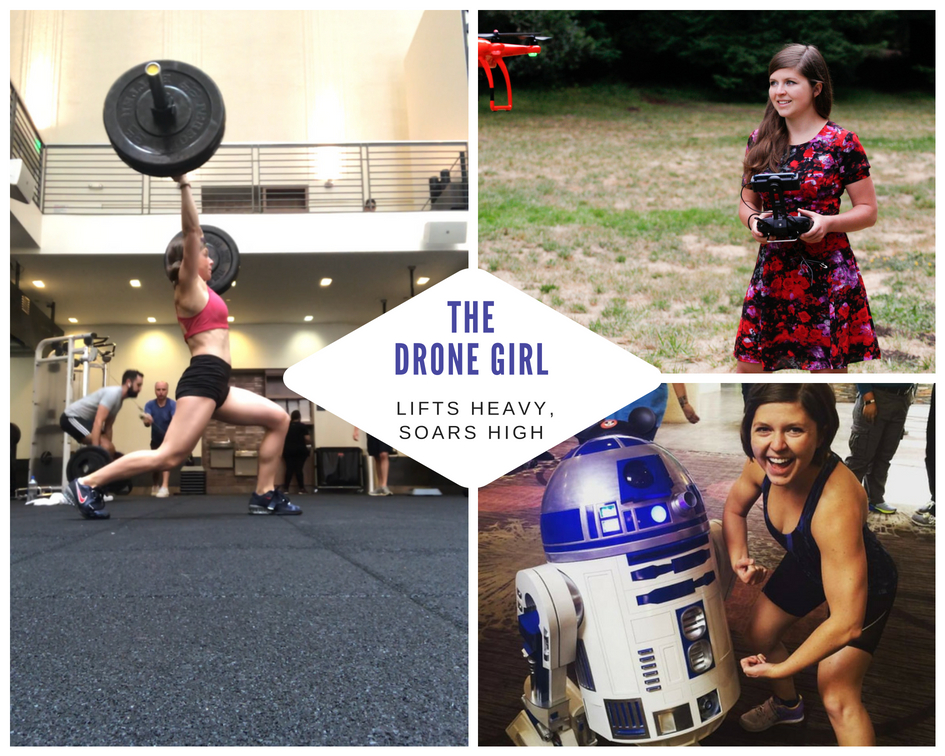 “Wow. How is that possible?” That’s one of the likely thoughts going through the mind of anyone watching a video of four-foot-tall, 100-pound Sally French as she takes a deep breath and blasts a barbell above her head. It’s also what a lot of men think when they see this 26-year-old “Raw USPA 44kg Drug Tested National Record Holder and International Elite Powerlifter” fly a drone.

“I kind of find a thrill in being able to break barriers,” says Sally. “Both with drones and powerlifting there’s this shock factor that you’re a woman and you can do this.”

She might be physically petite, but Sally has an outsized impact on everything she tackles, powering past others’ expectations and showing what women can really do. She has also raised the profile of female drone-industry colleagues through her 35,000-reader-strong blog, “The Drone Girl.”

“I see it as my personal mission to make sure we are including diverse voices when we talk about drones,” says Sally. “Women can be drone pilots and drone experts just as much as men can.”

Maintaining a positive perception of women and drones remains a work in progress. There is more pressure on women to do everything perfectly. “If a guy crashes a drone, its fine. If a woman flies the drone, she’s almost representative of all women,” observes Sally. “If a woman crashes the drone, then suddenly that says to the world that women aren’t capable of flying drones.”

The gender challenge extends to even something as simple as FPV goggles or drone controllers that are tailored to larger male figures. “Many of these flaws come because women aren’t at the drawing board…often, I feel like its still by men, for men,” she says.

Don’t think for a minute that she’s complaining, though. “I’m proud of how I’ve risen in a male-dominated industry,” says Sally. “What I love about the drone industry is it’s taken me so many places I never would have gone. It’s opened my eyes to so much of what’s out there in the world, and it’s all because of drones.”

From speaking at conferences in Australia, to flying drones in the Middle East, to working on projects in the Arctic Circle, Sally has set a memorable example for women looking to follow in her footsteps. “You have to work 10 times harder than a man in this industry to prove that you belong,” she says, “but it’s gotten easier to work 10 times harder because there are so many inspiring women out there now.”

Sally believes women supporting other women is one of the greatest ways to bring more diversity to the industry. She finds support within the Amelia Droneharts Facebook Group, a community of women from all walks of life dedicated to empowering one another to pursue their love of drones. She has also found inspiration in other role models.

For example, Sally says Sharon Rossmark “has gone above and beyond. She’s an executive at the Women in Drones company and she has put in so much of her personal time to build up women in the industry.” Sally also looks up to her own older sister, Holly, who has a successful career in the technology industry.

While her “The Drone Girl” blog is not directly geared toward women, it is a platform for uplifting and encouraging women to enter the space. Sally hopes to grow the blog to educate and encourage the general public to learn about the limitless possibilities that drones can bring to our daily lives.

She also feels strongly that journalists, like herself, need to include more women in the drone conversation in an effort to change the perception of who drone experts are and can be. “I think writers in the media are in such an incredible position to shape the narrative about drones.” Female voices must be heard when discussing the future of drones because of the invaluable insights and perspectives women bring to the industry.

Sally is pushing boundaries and transforming traditional perceptions about gender in the drone industry one blog post and one drone flight at a time. We look to women like Sally to inspire the next generation of women in technology and to take the future of drones to new heights.

Here at FlightWave, we are committed to promoting diversity in the drone industry and celebrating all that women have to offer in the space. Stay tuned as we continue to spotlight female drone experts who inspire us. Also, check out and support “The Drone Girl” blog.